In 2022, school Nº361 in Warsaw, Poland, received a high influx of refugee students from Ukraine. In this video we will learn how the school has welcomed these students, and helped them to learn the Polish language, collaborate with their new peers and most importantly, to feel safe. 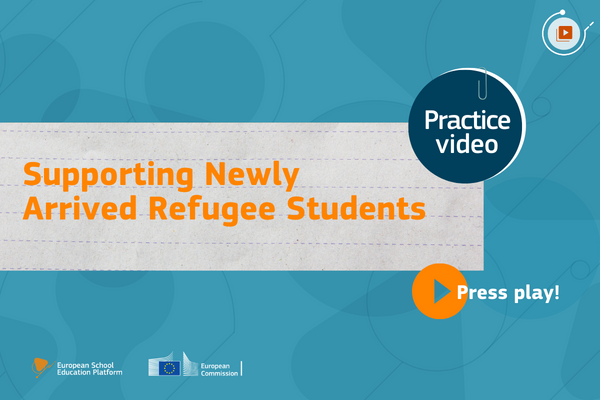 School, number 361 in Warsaw, one of the newest schools in Warsaw. Within the last six months, the school has hosted probably the highest number of Ukrainian refugees from different parts of the war-covered country. Before holiday, we hosted more than 200 students who had to run away from the areas of war.

Our idea within these first months was to put them in a safe place, to provide them with a safe place, not necessarily to learn, but basically to survive. After the holiday the situation has dramatically changed, it turned out that 80% of the students decided to stay here in Poland for months, maybe for years. Now our task is totally different. It is not only safety, but also integration into the Polish system of education.

We came up with various ideas to provide them with the proper process of learning. One of the ideas is to run preparatory classes, classes which provide them basically with proper knowledge of Polish, which is a start for the degree being in our system of education.

While at the beginning the role of a cultural assistant is invaluable, working in this class you need to find a moment where you say “enough” and move the cultural assistant a bit away from such direct work in the classroom assigning them various other tasks so that the children naturally start using the Polish language. We here do not want at all to cut them off from their culture, tradition and history. This is absolutely not our intention. Children who are placed in mainstream classes, because we also have such children, are definitely better at learning the Polish language, because most of them were in the preparatory class last year.

At the end of the year, a team of teachers recommended that these children be placed in mainstream classes, because their ability to use the Polish language was already good enough and, in our opinion, they acclimatised very well in these classes, they are doing well there. Another idea is to put single persons into Polish classes. But with these numbers, and we talk about dozens of students, it is just impossible. That is why we have introduced a totally new idea of multicultural classes. These are the classes which consist of 30 up to 50% of Ukrainians, and the idea turns out to be a total revolution. It turned out that the students being in these classes can communicate in Polish, English and Ukrainian, and they are capable not only of integration into the Polish system of education, but also bringing something else into this Polish system. So we are not only integrating them into the system, but we are integrating, we are fully integrating with them. We are creating a new system of education, in fact, a joint Polish-Ukrainian system of education.

In addition to the typical educational activities in which these children participate, it is extremely important, in our opinion, that those who need additional help receive such support in the form of extracurricular activities. Sometimes these are additional Polish language classes, because each student who experienced migration is entitled to such classes by law, i.e. two hours a week of additional Polish classes.